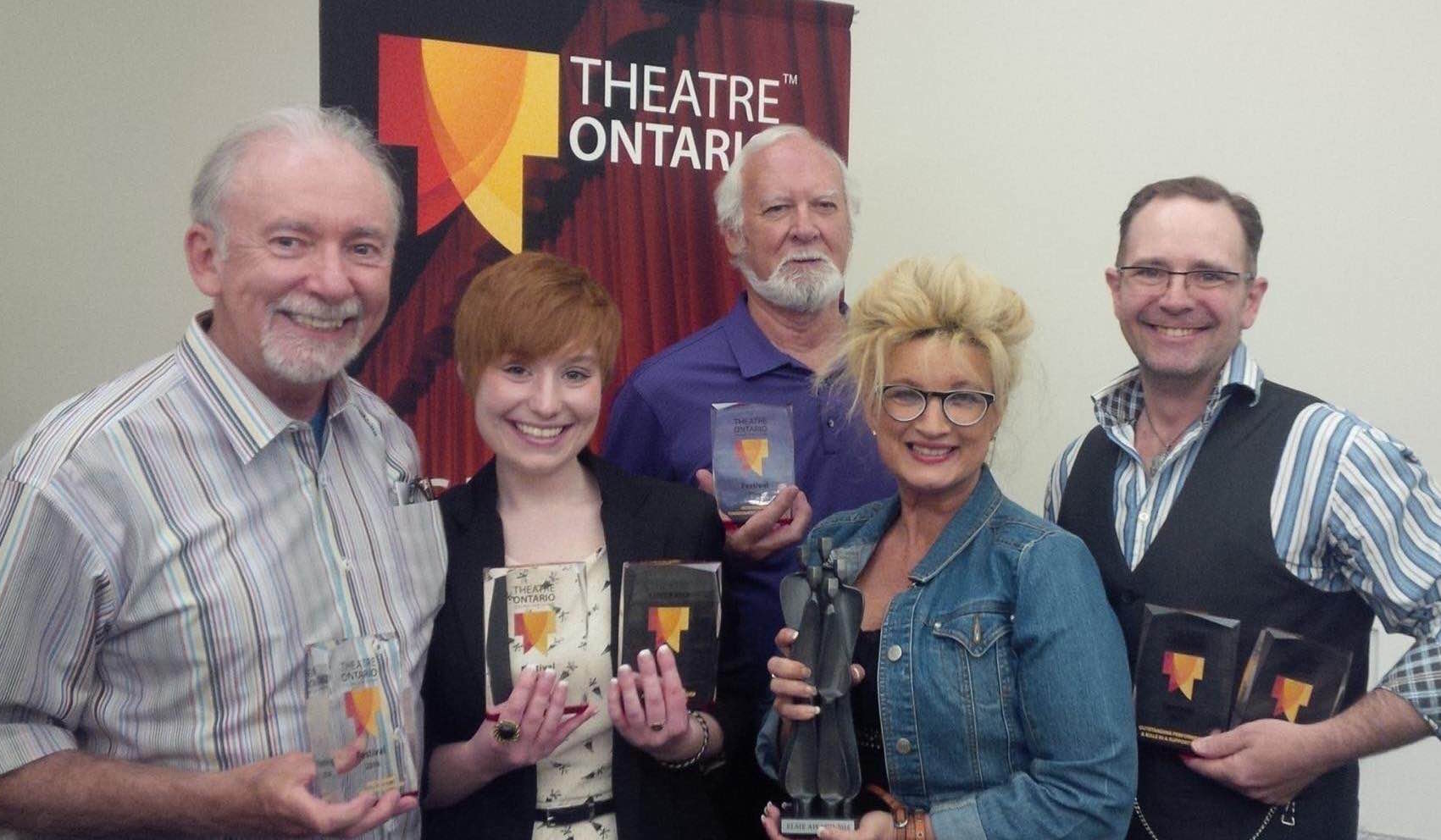 Adjudicator’s Award – an award given at the discretion of the adjudicator for something that she felt deserved merit but was not included in the regular awards – of special mention was the curtain call – thank you Alina Adjemian;

Outstanding Performance by a Male in a Supporting Role – David Hoare as Bernard, Boeing, Boeing for “Heart pounding struggles to get out of trouble”.

Outstanding Performance by a Male – Jamie Hunt, Boeing, Boeing for “Embracing the many personalities of Robert”

Outstanding Coordinated Production – this award was not given by the adjudicator but rather by the hosting company and was awarded for the theatre group that was the most organized and easy to work with for move-in and move-out. Ken MacDonald accepted this on behalf of all of those involved in the coordination.

Producer, Beth Hunt, expressed her thanks to the entire cast and crew after the awards were presented:

“On behalf of Jim and myself, I am once again extending a huge thank you to all of the volunteers involved with this show – thank you seems pretty tame considering, but it is completely heart felt – the show would not have been a success if even one person had not done their job.”

Entering the drama festival is a big task that involves organizing a large number of people over an entire season. Boeing, Boeing began with auditions in June 28, 2015, but the production team, those responsible for set design and construction, costumes, set decor, sound, lighting, props and stage management, were already in place. Once the dinner theater run was finished, Boeing, Boeing prepared to go to Peterborough. The set had to be smaller to fit a smaller stage so the set designer and the building team removed flats and rejigged doors. A small team of volunteers then prepared the plan to move the set, set it up, touch-up the paint and then set the sound and lighting – all in one day. Meanwhile, the director and the actors rehearsed and rehearsed in the smaller space to get the timing just right – essential in a farce!

Travelling to North Bay was another challenge and required more planning again, including travel and accommodations. The crew faced the additional problem of installing the set, with its six doors, on the stage at Joseph Scollard Hall without attaching it to the floor. And those doors have to be installed so that they open and close and can be slammed many times in a truly-French farce! Apparently they did, most impressively! The diretcor and the actors continued to rehearse right up the final night before driving the horse trailer with set, props and costumes to North Bay.

The Award for Outstanding Coordinated Production recognizes the success of all the logistics of creating and moving a production.Well done to all the cast and the production team for getting everything right and doing it efficiently.

Helen Pitt Matthew, who played Berthe, deserves the final word, expressing what all might be feeling after this exciting finale to their season:

It is most gratifying after working so hard for so long to have achieved the top prize! We certainly cleaned off that awards table! The commitment, the respect and the love for each other was there from the start and it wasn’t all work, it was so much fun. It ‘was easy’ and everyone connected with this show is family now. Glad I could be part of it. Each one of you is special.

This is not a job that you do and forget. I’m sure all of us have a line or two or 10 running through our heads long after the theatre is dark. This kind of memory will stay with us for a long time. People will be talking about us and waving to us in the street, right Jim?

From the Casting, Directing, Producing, Acting, Crewing and Building everyone was working for the team.

For more information and photos of the award winners visit the Theatre Ontario Festival page on Facebook at www.facebook.com/TheatreOntarioFestival.

The cast and crew of Boeing, Boeing absolutely did a bang up amazing job winning Best Play and 5 Awards at the EODL Festival in Peterborough. Producer Beth Hunt and director Jim Finan, along with the cast and crew, were thrilled to take their production, brilliant set and all, “on the road” to Peterborough for this year’s full-length play festival. They were even more thrilled with the terrific success, winning five awards and three additional nominations. Boeing, Boeing was selected for the EODL Festival after being adjudicated during its run at the Best Western Cobourg Inn and Convention Centre.

Congratulations to director Jim Finan and producer Beth Hunt, and to the actors Jamie Hunt, David Hoare, Helen Matthew, Kristy Bird, Jody Ledgerwood, and Anne Marie Bouthillette. Congratulations also to the crew, Kaye Torrie, Ken and Jody Forsyth, Jamie Finan, Ann Hancock, Tom Hall, Vince Edgar, Oliver Graf, Stella Graf, Joe and Diana Flynn, Mary Smith, Melissa Thornton, Muriel White and Ken MacDonald. A big thanks goes to the two crews of set builders that moved them into the theatre and out in one day and to Stevenson Cartage for the move.

How much do we love our volunteers…………LOTS!